The Beaver side-wheeler, the first steamship off the coast of British Columbia. On June 18, 1836, the Hudson’s Bay Company ship Beaver, the first steamship to travel on Puget Sound, departed Fort Vancouver for her first journey up the Pacific Northwest coast. To quote the Victoria News, “The coast of British Columbia has been a maritime highway for millennia. First Nations have always used our waterways as the most efficient way of traversing the challenging landscape of mountains and fjords that give our province its distinctive beauty. The Tlingit people of the Alaska panhandle were particularly famous for their far-ranging dugout canoes, which would regularly make the 1,400-kilometre journey to Puget Sound for the sake of trade. With the coming of European settlers in the 19th century, this coastal highway remained the primary mode of travel, but the boats found in its waters gradually changed.”

SS Beaver, one of the most historic vessels ever built 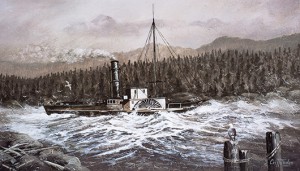 Built in England, the SS Beaver undertook a week’s steam trials in the English Channel on June 25th, 1835 and passed them with flying colours. She subsequently made the long 225 day journey around the Horn with her machinery and paddlewheels dismantled. She was rigged as a brigantine and proved to be an excellent sea vessel. She sailed up to Fort Vancouver on April 10th, 1835, and raised steam in the following May. For the next 52 years she navigated the waters of the Pacific Northwest, first as a trading vessel and eventually as a freighter and tug. She was the first steamship in the north Pacific.

This painting is from the official portfolio of limited edition prints for Expo 86. Catalogue of 18 original limited edition prints ca be viewed at www.paintedturtleartprints.ca. The weather is rough and stormy, similar to what it often encountered. The original SS Beaver side-wheeler made the long 225 day journey around the Horn rigged as a brigantine with her machinery and paddle wheels dismantled. She sailed up to Fort Vancouver on April 10th, 1835, and raised steam in the following May. Shown here off the Sunshine Coast in 1836, she was the first steamship in the north Pacific. For the next 52 years she navigated the waters of the Pacific Northwest, first as a trading vessel and eventually as a freighter and tug. 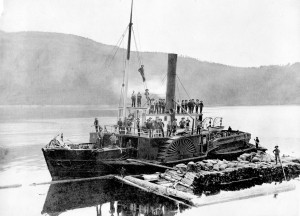 The SS Beaver was, according to one marine historian, one of the most historic vessels ever built. Indeed, the whole history of the British Columbia coast, for half a century, is linked to the career of this sturdy pioneer steamboat. Referred to by one archivist as possibly the sturdiest craft of her size as was ever afloat, the Beaver was the steamer-flagship of the Hudson’s Bay Company of England, and truly ruled the rugged coastline of the Pacific Northwest until 1888. It sported two 35-horsepower wood-fuelled steam engines, and consumed 1 cord of wood to travel close to one mile. For a full day’s cruise it burned about 35 cords.

On December 21, 1870, the SS Beaver was taken out of commission and handed over to the Hudson’s Bay Company. Four years later she was auctioned off and finished her career as a tug and supply vessel until she was wrecked off Prospect Point in 1888.

Canadian history Painting
This entry was posted on Wednesday, October 1st, 2014 at 4:10 pm and is filed under History of Canada, Pacific Coast, Western Canada. You can follow any responses to this entry through the RSS 2.0 feed. You can leave a response, or trackback from your own site.