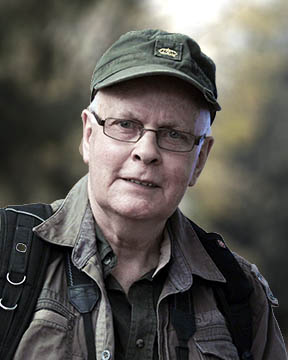 While many in the 60s played the stock market and tried to amass their fortune, John Crittenden lived a quiet life serving an apprenticeship as a pre-press specialist in the printing industry, raising his family and beginning his long career as a professional, working artist. For more than 48 years John earned a reputation as an honest artist who, in his early years, held two one-person shows per year in addition to accepting commissions from collectors, corporations and government.

John has lived and worked mostly in Alberta and British Columbia, producing and selling more than 1200 paintings as a professional. His experience as a graphic designer, illustrator and pre-press specialist, coupled with his love of photography, painting and printmaking, culminates in a rare combination of talents. A gifted artist, John’s style is unique and earthy. His strong use of earth colours is what sets his work apart.

In the early 1980s John produced the History of Transportation which became “the official portfolio of limited edition prints for Expo 86”. His work has been included in several magazines and books over the years, the latest two being his painting of Simon Fraser on the book cover for “Savage River” by Marjorie Wilkins Campbell and Chief Dan George in the book “British Columbia: Spirit of the People” by Jean Barman, which commemorates 150 years of British Columbia as a province of Canada. In 1978 he was listed by Who’s Who in American Art, Who’s Who in America and the Ontario Index of Canadian Artists plus several others.

John is the only Canadian artist that has steadfastly recorded the fast disappearing remnants of the early history of Canada West. During his whole career he has continued to paint the “things” left behind by the early settlers. “Things” like old farmhouses and barns, each constructed in the various building styles of Europe, to their fences still standing, to old wagons and early methods of travel, to important dates in the history of Canada West, to old fishing boats and totem poles. John has recorded them all in his own unique, earthy style.

Tied to the land

John is of Irish and Anishinabe Ojibway ancestry whose Canadian lineage can be traced back to Ojibway Indians living in the White Mud River settlement on the shores of Lake Manitoba. The Anishinabe are the third largest Indian tribe in North America, surpassed only by the Cherokee and Navajo.

While growing up in a small town in southern Manitoba, John took naturally to the woods and nature. To this day, although having embraced the digital technologies of the computer and camera and the ever-present Internet, he still feels most at home in the bush.

In 1963 John married Sharon Blewett in Calgary and together they raised three children, Brad, Kent and Carol. In 1973, after launching his career in Calgary and Edmonton, he established the Guild Gallery of Artists and Authors with Dr. Lipkind, president of the Alberta Dental Association, one of only two book store and art gallery combinations in all of North America. Although a wonderful experience and challenge, being an art director of a busy gallery was not what John wanted to do so he eventually sold his partnership to Dr Lipkind and moved to the interior of British Columbia where they built a house and studio on the shores of Adams Lake. Here, beside a pristine 42 mile long lake with hundreds of miles of virgin forest behind them, they lived for fifteen years and John resumed his career. “Those were fifteen of the best years of my life. What a place to raise a family and pursue a career. Finally, out in the middle of the bush, there was nothing to do but build our home and make art. That’s what we did and the whole family loved it. We actually became a family for the first time.”

John is an opponent of the central state, its wars and its socialism. “A study of history invariably reveals that the biggest enemy of any free people is their own government. People do not wage war against people. Governments wage war against governments. And the people pay, many with their lives. If a society wants peace the most basic thing they must do is limit the power of their government and the influence it has over them. That said, there are many good people in government. And they do a lot of good things. Except for a few psychopaths throughout all levels of government, the main problem is the system and the leaders, not the people. The system seems to favour the psychopaths and sociopaths for advancement to leadership. That is the number one problem in today’s world in my opinion.”

Graciously declining interviews over the years, John prefers to let his work speak for itself. “I’m just an artist. My work will outlive me and that is more important than I am. Too many artists spend too much time trying to be different or trying to be seen as important. That’s silly. Most great paintings are a series of mistakes if the truth were known. Great paintings are produced by the unconscious mind. They just happen. Instead of listening to artists babble on about their life, I think it’s best to simply enjoy their work. So I refuse to bore you. And anyway, my work is often too personal to talk about. I would not know where to begin.”