In this post I want to look at the original native settlers who lived on this land for thousands of years, inhabiting organized civilizations, maintaining sustainable economies, sophisticated political systems, elaborate spiritual beliefs and rich, vibrant cultures. These natives lived in small, nomadic groups across the continent and into the far north. That was soon to change.

The early 1900s saw the beginning of the settlement of Western Canada. During these years hundreds of thousands of immigrants chose this area of North America as their new home. Settlers came from all over the world to cross the prairies in search of a dream and freedom from the governments and tyrants of Europe and other areas. They brought their own methods of building homes and barns with them and created a unique history that can still be seen today if one wants to travel the back roads and take the time to look. But you better hurry because this heritage of both rural and city is fast disappearing. 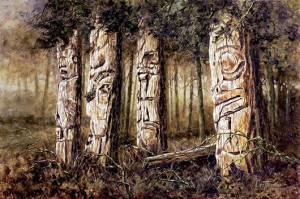 To quote Canada in the making “The Aboriginals of Canada faced three major problems in the years following Confederation: 1) displacement from their land, 2) the decline of the buffalo herds and 3) diseases for which they had no natural resistance. But  there were some areas where the Europeans were at a disadvantage. The Pacific Coast and especially the Queen Charlotte Islands, now called Haida Gwaii was one such place.

Haida Gwaii sits on the western edge of northern British Columbia. At the southern tip lies the old village of Ninstints, the most important village of the Kunghit Haida. The village of Ninstints is a hauntingly beautiful group of totem poles, poignant memorial to the richness of Haida culture. Many of the original totem poles are no longer there. Some have fallen down, beginning their long journey back to the earth. Others have been preserved and are now on display in museums. I actually did this painting of Ninstints from an old tintype I found in the archives.

As one looks intelligently at this ongoing history of Canada, it’s easy to see the fast-moving changes. One wonders how long it will be before Canada is once again a wilderness with everyone living in a few large cities. Not a pleasant thought to me. 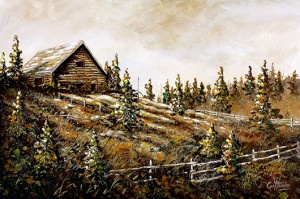 To every thing there is a season

This field I remember but for the life of me I can’t find the pictures I took. This was in the old film days and I’ve gone through several boxes of 35mm slides but no luck. So this is how I remember it. The barn is right and the falling down corral is about where I remember it. The rail fence around the field was in surprisingly good shape. The field itself I felt could have been used for either sheep or a few milk cows. There’s an old rutted trail about where I was standing when photographing this scene. The ruts were pretty close together so they must have been for a wagon or perhaps even an old Model T. The location was the foothills of Alberta 100 or so miles north of Pincher Creek. 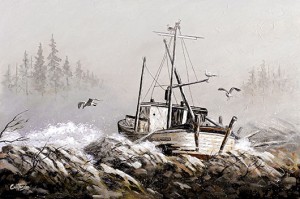 To quote the Canadian encyclopedia, “From earliest contact with outsiders, coastal Aboriginal peoples traded willingly and worked as labourers, boatmen and house servants. Those living in dispersed locations with viable subsistence economies were ideal seasonal workers in the early stages of resource development. In the 19th century, some communities created economic enterprises. However, as the mechanization and centralization of the fish and timber industries increased, participation of Aboriginal peoples as workers and independent small producers diminished. By the 1960s some communities were thriving while in others unemployment and underemployment in coastal communities had become chronic.” The fishing industry thrived and many old boats can be see up and down the coastline. This is one that I discovered.

One wonders what our cities will look like in a few years with all the old heritage buildings torn down and replaced with drab cement skyscrapers all in a row.

Canada West Canadian history Heritage
This entry was posted on Tuesday, April 7th, 2015 at 8:01 am and is filed under History of Canada, Pacific Coast, Western Canada. You can follow any responses to this entry through the RSS 2.0 feed. You can leave a response, or trackback from your own site.