Early Settlers of Canada: Where They Came From

In the very early days of Canada the fur trade was responsible for most early arrivals. The Hudson’s Bay Company was in the business of buying furs. In the beginning their real competitors were independent traders and the competition was cutthroat. In 1787 the North West company was formed and they became the Hudson Bay Company’s real competition. Other competitors were the American Fur Company and the Rocky Mountain Fur Company, mainly south of the border. In the early days the fur traders, explorers and Mountain men were a rugged and romantic era but it didn’t last long. It soon gave way to a flood of settlers and the settlement of Canada began. My main interest is the early settlers of western Canada. “It is not my intention to get into arguments with historians or to write a historical account of the early settlers. I hope this page will simply set the stage for my work going forward.

Early days of the fur traders 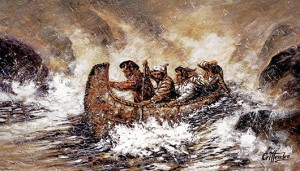 Simon Fraser and the voyageur Canoe, 1805
Following a rough, angry Fraser River to its mouth in 1805. Reference was supplied by the Vancouver Central Library.

“For nearly 250 years, from the early 17th to the mid-19th centuries, the fur trade was a vast commercial enterprise across the wild, forested expanse of what is now Canada. Sustained primarily by the trapping of beavers to satisfy the European demand for felt hats, the intensely competitive trade opened the continent to exploration and settlement, financed missionary work, established social, economic and colonial relationships between Europeans and Aboriginal people, and played a formative role in the creation of Canada.” The Canadian Encyclopedia

“In the 18th to 19th century, the only immigration western Canada or Rupert’s Land saw was early French Canadian North West Company fur traders from eastern Canada, and the Scots, English Adventurers and Explorers representing the Hudson’s Bay Company who arrived via Hudson Bay… Migration from Britain was a period of high immigration to Canada from 1815 to 1850… Canada became a nation in 1867, Rupert’s Land became absorbed into the North-West Territories [and Canada was born]”. From Wikipedia 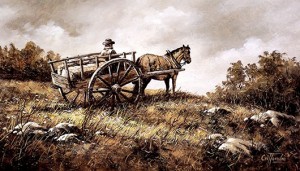 Red River Cart pauses for a rest, 1820
Cresting a hill on its way across the prairie. Reference was supplied by the Glenbow Foundation and the Vancouver Central Library.

The Red River Cart was an early development of the Metis and used mostly to get supplies out west and furs back to market. With the Dominion Lands Act of 1872 it became a way to carry early settlers across the prairies and the real settlement of western Canada began.

Early settlers often used a Red River Cart to get to their homesteads. Fir traders and buffalo hunters used Red River Carts to haul the buffalo meat and hides. The buffalo hunters followed the buffalo herds and shot the buffalo, then skinned the animals and sold the hides at trading posts. The Cart was made of wood. The parts were held together with wooden pegs and strips of rawhide. It’s said that you could hear them squeaking for miles. Strips of rawhide were also wrapped around the wooden wheel rims. It was a very strong Cart and lighter than most wagons. 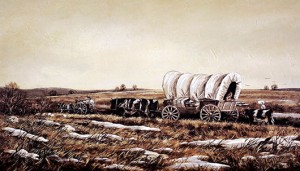 Conestoga wagons were strong heavy wagons made of wood and iron, and pulled by a teams of horses or oxen. To protect the cargo, the wagon was covered with a tarp. “The first known mention of a ‘Conestoga wagon’ was by James Logan on December 31, 1717 in his accounting log after purchasing it from James Hendricks. It was named after the “Conestoga River” or “Conestoga Township” in Lancaster County, Pennsylvania, and thought to have been introduced by Mennonite German settlers.” Wikipedia 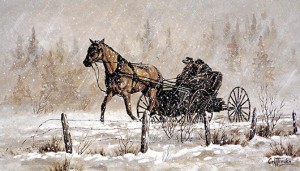 Horse and Buggy, southern Alberta, 1905
I can remember going into the town of Melita in southwest Manitoba with my granddad. The year was about 1941. We were wrapped up in buffalo robes with hot rocks to put our feet on. I still love the old-fashioned raisin pie that he always bought for my sister and me.

The Horse and Buggy

There were many different buggies and wagons used in Canada in the early days. Some were made here and others were imported. They were in common use in the towns and rural countryside. I can remember riding with my granddad, from our farm in southern Manitoba, in to Melita for supplies in a horse and buggy like this. We had hot rocks on the floor and were wrapped in a buffalo robe and blankets to keep warm. I still remember the hot raisin pie he always bought my sister and me. The only difference was that it had a back seat with a top over it. When the snow became too deep a sleigh or cutter was usually used and the buggy was put away until spring.

I had country doctors in mind when I did this painting and I can remember a couple of times being visited by a doctor from Melita in a horse and buggy like this. I’m sure it was one seat because for some reason I remember sitting in it once. It was more or less the same as this painting. That would be about 1941 or 1942.

“Until mass production of the automobile brought its price within the reach of the working class, horse-drawn conveyances were the most common means of local transport in towns and nearby countryside. Buggies cost as little as $25 to $50, and could easily be hitched and driven by untrained men women or children.

By 1900, there were 150,000 German pioneer settlers in western Canada. Between 1870 and 1880 several thousand Mennonites came from Russia. Their successful settlements in southern Manitoba demonstrated that they were well adapted to prairie farming and became a viable strategy for opening the West. “In Saskatchewan the early settlers came directly from Russia… They came not as large groups but as part of a chain of family members, where the first immigrants would find suitable locations and send for the others. They formed compact German-speaking communities built around their Catholic or Lutheran churches, and continu[ed] old-world customs.” From Wikipedia

It is believed by many that individual Ukrainian families may have settled in southern Manitoba in the 1870s alongside blocks of Mennonites and other Germans from the Russian Empire. “The first wave of Ukrainian immigration to Canada arrived in 1891. The Western Ukrainian agricultural settlers brought with them a style of folk architecture dominated by buildings made of unprocessed logs, which was much better suited to the wooded parkland than the bald prairie”. From Wikipedia

The first house built by these early settlers was their own version of the sod hut…. The second house was often a white-washed and plastered log cabin usually with thatched roof, very similar to those seen in Ukraine. Barns, chicken coops, granaries, and so on were all built using the same techniques as the houses.

“The origin of the Doukhobors is uncertain… Their pacifist beliefs and desire to avoid government interference in their life led to an exodus of the majority of the group from the Russian Empire to Canada at the close of the 19th century… The Doukhobors are a Christian sect established a number of commune-style settlements in Western Canada. They have brought with them a Southern Russian dialect of their communities of origin, which over the following decades underwent some changes under the influence of the Canadian English environment and the speech of the Ukrainian settlers in Saskatchewan.” From Wikipedia 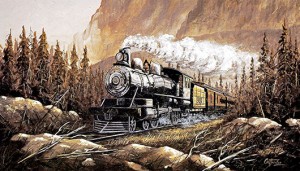 Commencement of a transcontinental railway within 2 years and completion within 10 years were conditions of British Columbia’s entry into Confederation in 1871. Competition for the lucrative contract for the railway was bitter and it took longer than planned. Permanent settlement colonies for early settlers west of the Great Lakes were beset by difficulty and isolation until the railway was built.

In 1899 the Canadian Pacific Railway inaugurated the Imperial Limited, a transcontinental passenger train with an average speed of twenty-nine miles per hour. This cut the traveling time between Montreal and Vancouver from one hundred and thirty-six days to about one hundred hours. It now took about five days, where, before the railway, it took about five months to cross Canada.

This painting shows the Imperial Limited steam engine on its first run across Canada in 1900. Reference was supplied by the Toronto Metropolitan Central Library.

Early settlers brought with them their own unique building styles

In the middle of the 19th century, as the early settlers moved west, sod barns and houses became common on the prairies. The influence of the Germans can be seen in the “Pennsylvania Dutch” style barns. Other styles known as Gable, Gambrel, Saltbox, Hip-Roof, Hipped-Gable, Monitor, Arched and Shed among others can be seen around the Web.

It is the history that remains of these and other early Canadians that John records in his work. Their history or what remains of it can still be seen across western Canada. By examining their construction one can usually determine what part of Europe the builders came from.

Canada West Canadian history Painting
This entry was posted on Thursday, November 6th, 2014 at 3:27 pm and is filed under History of Canada. You can follow any responses to this entry through the RSS 2.0 feed. You can leave a response, or trackback from your own site.