Nutritionally deficient factory farmed food is loaded with poison chemicals & pesticides. The information in this post concerns fake food, greed, a possible hidden agenda and the findings published by the Proceedings Of The Royal Society B, dated July 27, 2016, under the title Neonicotinoid insecticides can serve as inadvertent insect contraceptives. This concerns insecticides widely used in factory farming, neonicotinoids (4.5 ppb thiamethoxam and 1.5 ppb clothianidin) and the science that found that they reduced bee sperm counts. Bee deaths are a major problem and of extreme importance to the very survival of life on earth. 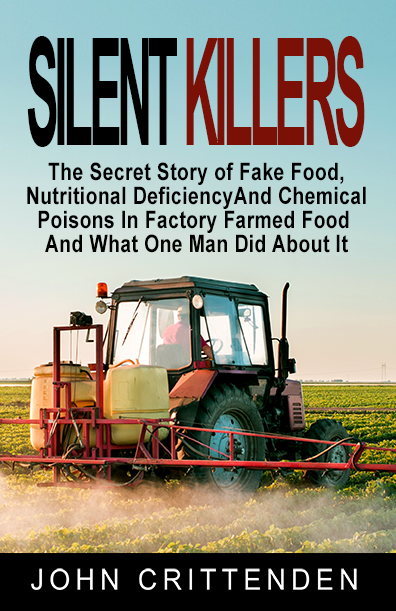 This timely and important admission by the Society supports the position taken in my latest book SILENT KILLERS. The book is about the practice of intensive factory farming, fake food, damage to the soil, direct application of fake fertilizers nitrogen, phosphorus and potassium (NPK) and dangerous chemicals like neonicotinoids. The pronouncements coming out of I.G. Farben that there’s absolutely no link between GMO use and rising cancer rates, falling crop yields, fake food, etc. are now refuted by no less than the Royal Society. And it is now proven that there is a connection between neonicotinoids like glyphosate, chief ingredient of Monsanto’s “Roundup”, and the collapse of the honey bee population.

Quoting from the Society; “Neonicotinoid pesticides have been mostly banned in the European Union since 2013. Neonicotinoids have been widely used for decades, but in the past several years concerns have been raised about their environmental effects, leading to the restrictions for countries in the E.U. Other countries, including the U.S., only lightly regulate their use.”

It has been my contention for some time that if these pesticides harm honey bees then they may very well also directly harm humans. There may be more to factory farms than simple greed. It turns out that there has also been a similar fall in human male sperm rates over the past few decades, specifically since the introduction of factory farming after WWII. As I wrote in a previous post in October 2014 about the connection between mineral deficiency and honey bee deaths I wonder if this has been the goal all along, with bees simply being “collateral damage” from the assault on the real target? GENOCIDE by another name?

On another note, there is no longer enough nutrition in the food we buy from grocery stores to keep a person alive and healthy. I have proven from research I did with the USDA nutritional database that I do not get even the minimum RDA of minerals and vitamins from the food I eat. And I eat well. The scientists working for the corporations and elites that are behind factory farms are not stupid. In fact they are very bright and highly educated. I cannot accept that they do not know what they do. Hats off to Russia and several EU countries who have said a huge “NO” to GMOs of any kind.

factory-farmed food Health pesticides poison chemicals
This entry was posted on Tuesday, August 2nd, 2016 at 5:13 am and is filed under Book Updates, Factory Farmed Food, Food Nutrition, Health. You can follow any responses to this entry through the RSS 2.0 feed. You can leave a response, or trackback from your own site.