Many iPhone Vision Test Apps But Are They Any Good?

I recently did a search for vision test apps on the Mac App Store. After all, “there’s an app for everything”, right? If you can believe it I counted 144. I decided to hit google and read up on them because this was all new to me. I hadn’t even thought of a vision test app for AMD. I did find some reviews but read where many of them could not predict a patient’s standard Snellen visual acuity within one line (in my opinion that isn’t all that bad actually). But this couldn’t compare with normal optometrist vision tests. Then I googled “iPhone vision test” and found MobHealthNews with a review about one iPhone vision test app that had been granted a Class II prescription-only 510(K) clearance by the FDA.

To quote from MobHealthNews: “Vital Art and Science has developed the test for patients with serious degenerative eye conditions such as diabetic retinopathy (DR) and age-related macular degeneration (AMD), who will be able to use it to monitor their vision regularly at home. The software compares results to previous results, and can automatically alert a physician if a significant change has occurred, so the physician can respond with an appropriate therapy in a timely way. As the product is developed, the company also plans to enable it to send patients’ results to their EHRs in a safe, HIPAA-compliant way.”

Yes, There’s an App For That. A Vision Test App 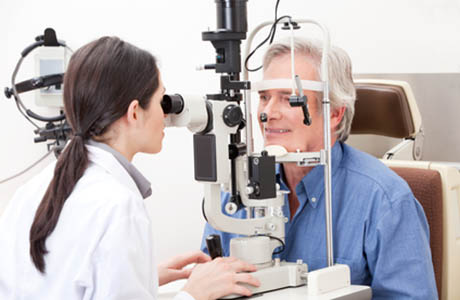 Optometrists are usually the first to see early signs of AMD. In my case my Optometrist had no clue at a scheduled test in June 2011. Only six months later however, at a regularly scheduled appointment in December 2011, my Ophthalmologist told me I had AMD in one eye. Only three months later I was totally blind in that eye. Perhaps an iPhone vision test app like the one in this post might have given me an earlier clue something was wrong.

“According to President Mike Bartlett, the company hopes to have a downloadable app version of the platform eventually. But because the software is only currently cleared for prescription use, the initial form factor will probably be to distribute pre-loaded iPhones to patients.”

To quote further from their Website: “The app runs a test called shape discrimination hyperacuity (SDH), which is licensed from the Retina Foundation of the Southwest, whose research showed it to be one of the most likely vision tests to work on an electronic device. This is partly because, unlike the famous Snelling test typically used in opthamologist offices, the SDH is distance insensitive, which means patients using it at home can hold it at any natural distance from their faces without effecting the accuracy. In two different clinical trials, Vital Art and Science found the test to be equal to or better than a Snelling test in terms of accuracy. In the test, patients are repeatedly presented with three shapes and have to tap the one that looks different.”

Bartlett believes over-the-counter clearance is something that will come along for diagnostic apps, once they’ve become more commonplace.

To again quote President Mike Bartlett: “We felt from the beginning we wanted to develop the regulatory approved version,” said Bartlett. “The one that’s going to be used and trusted by doctors.”

Here is the Vision Art and Science Website that has more information about this very interesting app and yes, I plan to download many of the other vision test apps for the iPhone and test them myself. I will post the results.

Blind macular degeneration Personal health Vision
This entry was posted on Tuesday, June 2nd, 2015 at 8:00 am and is filed under Health, Macular Degeneration. You can follow any responses to this entry through the RSS 2.0 feed. You can leave a response, or trackback from your own site.

2 thoughts on “Many iPhone Vision Test Apps But Are They Any Good?”