Think Different & Gain Power Over Our Lives and Health

Early in my life I began an apprenticeship as a pre-press specialist in the printing industry. It was interesting work and I was planning to get married. I thought it was a good steady profession that could support my family. To make a long story short it lasted about 6 years and I learned a good trade and skills that empower me to this day. But it didn’t take long for me to realize that I wasn’t cut out for punching a time clock. I wanted to do certain things differently, to be free to try better ways. But every industry has their “standards” and I had to work with those constraints. So I eventually decided to strike off on my own. I left a good-paying job with lots of potential and opened a freelance design studio. I did work for printing companies and advertising agencies as well as many of the oil industry corporations that had their head offices in Calgary. TAS, The Art Studio, was the only freelance design studio at that time between Winnipeg and Vancouver and I was busy.

I don’t mean for this post to be self promotion. I mean for it to be a critical, short look at my life that exposes my thinking process and offers reasons why I’m very good in certain areas and amazingly poor in others. When I decided to open the design studio the only people who supported me, other than my mom, dad and sister Anne, was my wife, Sharon. We were newly married and Sharon was expecting our first child but nevertheless she supported me. The first month I made more money than I made punching a time clock and it didn’t end. I soon started doing more painting and having one-person shows in local art galleries in addition to the commercial stuff that paid the bills. Those were good years for us and I have many fond memories. 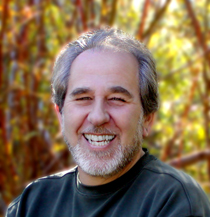 This brings me to the work of someone I have followed for many years and have learned much from. Dr. Bruce Lipton, Ph.D. is known for his work in epigenetics, a new science that recognises that environmental signals are the primary regulators of gene activity, that long-standing conventional beliefs that the genome controls our lives is false and that our ability to control our environmental interactions opens the door to unlimited possibilities.

In The Biology of Belief Dr Lipton writes: “The conclusions of the “new” biology provide a radical departure from our conventional beliefs of how life works. In contrast to the notion that we are biochemical automatons driven by genes, the new insights reveal that it is the mind that controls genes, which in turn shape our biology and behaviour. The self-conscious mind, associated with our individual identity and the manifestation of thoughts, is guided by our own personal desires and intentions.” These words resonate with me. They give me understanding of why my ability to think different just works.

As Dr. Lipton writes: “The conclusions of the “new” biology provide a radical departure from our conventional beliefs of how life works. In contrast to the notion that we are biochemical automatons driven by genes, the new insights reveal that it is the mind that controls genes, which in turn shape our biology and behaviour. The self-conscious mind, associated with our individual identity and the manifestation of thoughts, is guided by our own personal desires and intentions.”

The Ability to Think Different Certainly Helped Me

I believe the reason that I was able to reverse macular degeneration when everyone was telling me that it was impossible was because I refused to believe them. It wasn’t something I had to fight with. It was simply a mind-state that allowed for the unexpected without worrying about it. Over a year and a half I did the research, studied the science and educated myself. Then I developed my protocol and embarked on a journey where my body took over without me having to make any big decisions. BLIND FAITH is my story of what I learned, how I connected the dots between several fields of science and how I put it all together.

What I have accomplished is something anyone can do but we need to turn off the fear that is constantly pushed by mainstream media. We need to turn off the programming that tells us we are powerless. We need to ignore the criticisms that will surely come when we start doing things differently. We need to savor learning from our experiences and the freedoms it brings. We need to settle back and enjoy the journey. Like Bill Hicks said so well, “it’s just a ride and we can change it anytime we want.”

Blind Health macular degeneration
This entry was posted on Tuesday, April 21st, 2015 at 8:00 am and is filed under Health, Macular Degeneration. You can follow any responses to this entry through the RSS 2.0 feed. You can leave a response, or trackback from your own site.