Western Canada beckoned early settlers in search of a home

Aboriginal peoples have lived in Canada for 10,000 to 11,000 years or longer. Scientists have hypothesized that they arrived on this continent from Asia, travelling over the Bering Strait but that is highly questionable given recent discoveries across all of North America. In any event the early 1900s brought huge changes to Canada and saw the beginning of the settlement of Western Canada. During these years hundreds of thousands of immigrants chose this area of North America as their new home. They initially came from Europe but eventually from all over the world to cross the prairies in search of a dream and freedom from the governments and tyrants of Europe. Travelling in wagons or carts, often in quit long trains, they brought with them their own methods of building and created a unique history that can still be seen today. 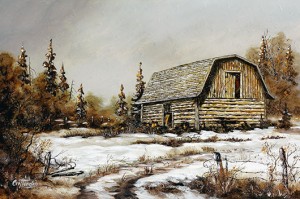 And the silence speaks of love

I lived much of my early adult life in Alberta and know that area well. I have probably produced at least eighteen paintings of old barns along the strip of foothills from west of Edmonton down to Pincher Creek. Sold them all. I wish I had kept more photographs of them but I usually started them on location and finished them in the studio. Those were the days…

Many of these early settlers choose to settle in the grasslands while some pushed on into Western Alberta, the foothills and into British Columbia. Western Canada is home to an amazing history of barn styles, some of which have their roots in Medieval times.

Encouraging British and European immigrants to settle on the prairies was part of Prime Minister Sir John A. Macdonald’s plan to establish Canadian sovereignty over the North-West Territories. 1815 to 1850 was a period of high immigration to Canada. Canada became a nation in 1867, Rupert’s Land became absorbed into the North-West Territories and Canada was born. There was already talked in the United States of expanding north of the border. 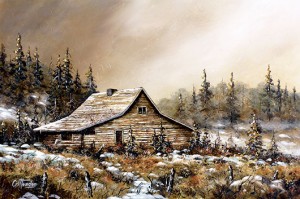 I just discovered a wonderful Website on western Canada history, Heritage Barns of Alberta. I bet I’ve painted some of the barns they talk about. I’ve painted many in Alberta and a few in British Columbia.

“There are thousands of historic barns in Alberta, most of which are known only to local farmers and community members. There is very little documentation about Alberta’s early settlement that focuses on the construction of barns and this history is slowly being lost as barns are neglected or destroyed. Barns are an important part of Alberta’s rural history.”

“Like the grain elevator, heritage barns are a symbol of the rural agricultural history of the West, and a representation of the first farmers of the area. By examining the style of architecture, the physical construction, and the individual histories of the farmers, barns tell the history of the community and convey information about the time, purpose, and heritage of the farm it was built on.” – Heritage Barns of Alberta

Canada West Canadian history Painting
This entry was posted on Wednesday, October 1st, 2014 at 8:56 pm and is filed under History of Canada, Painting, Western Canada. You can follow any responses to this entry through the RSS 2.0 feed. You can leave a response, or trackback from your own site.